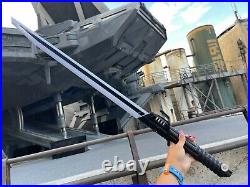 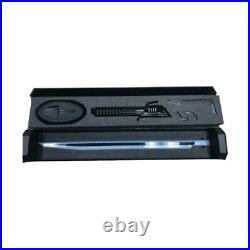 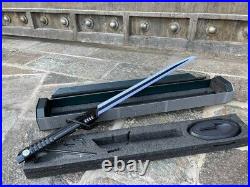 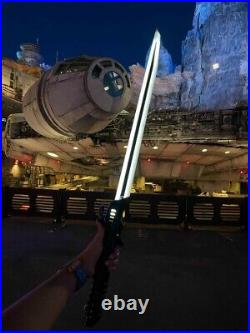 New sealed from Disneyland park. STAR WARS DISNEY GALAXY’S EDGE MANDALORIAN DARKSABER LEGACY LIGHTSABER HILT SET. Galaxy’s Edge The Mandalorian Darksaber Legacy Lightsaber. Exclusive Star Wars Galaxy’s Edge The Mandalorian Darksaber Legacy Lightsaber. Features lights and sound effects. Hilt, Blade and case. Each lightsaber comes in its original storage case. Recommended for ages 8+. Legend tells that it was created over a thousand years ago by Tarre Vizsla, the first Mandalorian ever inducted into the Jedi Order. After his passing, the Jedi kept the saber in their temple. That was until members of the House Vizsla snuck in and liberated it. They used the saber to unify the people and strike down those who would oppose them. At one time, they ruled all of Mandalore wielding this blade. This saber is an important symbol to that house and respected by the other clans. KANAN JARRUS AND FENN RAU. The Darksaber was an ancient and unique black-bladed lightsaber created by Tarre Vizsla, the first Mandalorian ever inducted into the Jedi Order, prior to 1032 BBY. The weapon was kept in the Jedi Temple after Vizsla’s passing, but members of House Vizsla stole the saber in a conflict with the Jedi during the fall of the Old Republic. The Darksaber was passed down, generation to generation, by the ancestors of Pre Vizsla, who held onto the weapon even after the pacifist ideals of the New Mandalorians replaced the warrior ways of Mandalore. The Darksaber was an ancient black-bladed lightsaber. It had a unique blade that was shorter than that of most lightsabers, and shaped like a traditional sword. Its overall profile was distinctly Mandalorian with an angular pommel, hand guard, and slit-shaped blade emitter. The sound emitted by its blade was also higher pitched than other lightsabers. The Darksaber had a crystal which served as a conduit for Force energy. The wielder’s thoughts and actions guided the blade’s current of power, with the blade often producing an electrical effect in response to a heightened emotional state. The Darksaber was also capable of parrying a blow from a lightsaber, with the blades being drawn to each other in an almost magnetic pull. Like other typical lightsabers, the darksaber could not cut through Becker. It was respected by the Mandalorians as a symbol for the leadership of House Vizsla, and later Death Watch. According to Mandalorian custom, one could only obtain the Darksaber by defeating the previous owner in combat. Should they have claimed it any other way, their claim was considered illegitimate. However Bo-Katan received the Darksaber from Sabine Wren without the fight and was accepted by other clans. This item is in the category “Collectibles\Disneyana\Contemporary (1968-Now)\Theme Park Souvenirs”. The seller is “fashiontechcollectibles” and is located in this country: US. This item can be shipped to United States, Canada, United Kingdom, Denmark, Romania, Slovakia, Bulgaria, Czech Republic, Finland, Hungary, Latvia, Lithuania, Malta, Estonia, Australia, Greece, Portugal, Cyprus, Slovenia, Japan, China, Sweden, South Korea, Indonesia, Taiwan, South Africa, Thailand, Belgium, France, Hong Kong, Ireland, Netherlands, Poland, Spain, Italy, Germany, Austria, Bahamas, Israel, Mexico, New Zealand, Philippines, Singapore, Switzerland, Norway, Saudi Arabia, United Arab Emirates, Qatar, Kuwait, Bahrain, Republic of Croatia, Malaysia, Brazil, Chile, Colombia, Costa Rica, Panama, Trinidad and Tobago, Guatemala, Honduras, Jamaica, Antigua and Barbuda, Aruba, Belize, Dominica, Grenada, Saint Kitts-Nevis, Saint Lucia, Montserrat, Turks and Caicos Islands, Barbados, Bangladesh, Bermuda, Brunei Darussalam, Bolivia, Ecuador, Egypt, French Guiana, Guernsey, Gibraltar, Guadeloupe, Iceland, Jersey, Jordan, Cambodia, Cayman Islands, Liechtenstein, Sri Lanka, Luxembourg, Monaco, Macau, Martinique, Maldives, Nicaragua, Oman, Peru, Pakistan, Paraguay, Reunion, Vietnam.